Eventually the entry line for the PhD program of Sun Yat-sen University has been revealed today with 2 days earlier than its estimation, as is published on the web. Thanks to the suggestions from Jianguo, a younger student following my professor, otherwise I shall miss this notice, but as foolish as waiting for the result until 22nd. The result is acceptable, that I am able to participate the second run of the exams, though whether I shall be admitted is still of mystery.

The score, unlikely the line published today, has been known much earlier. Though the score seems to be not that bad, there is no certain information on whether this is adequate. That’s why I didn’t push the score out directly when I got that two weeks, but only announcing it on my twitter with quite limited audience. The line published today, however, proves my concern. As I anticipated earlier, the sub-lines for each score, including the test of English language and two professional courses, should be around 50-55, with the basis of 100 points in total. While the formal version, on the other hand, requires a high score on both English and professional courses. For the majors in management school, including mine, want a score no lower than 55 for English and 60 for the rest courses.

Following is a picture of my result. To protect the privacy, both my name and ID number are covered. I don’t know if it is the fortune that I achieved the score that is, instead of much higher than, just equivalent to the requirement. it reminds me of the occurrence 3 years ago when I was still a student of Nanjing Normal University, waiting for the information from Zhongnan University of Economics and Law, my present school, the result of postgraduate entrances. Now both my mood and situation are surprisingly similar. The only difference is that I am not that young any more, and I start to consider more. 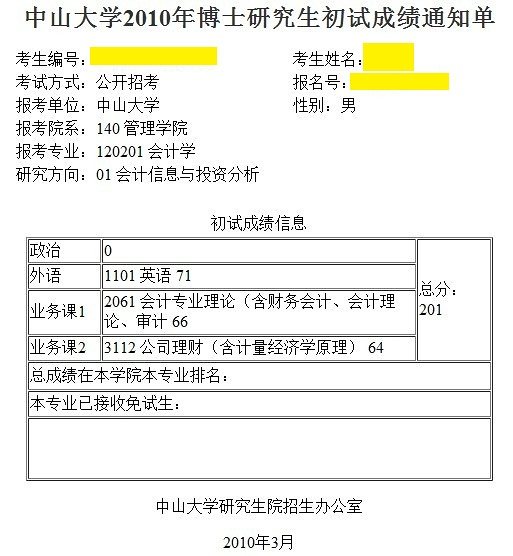 Now that the result for the first run is acceptable, I don’t know how it would be for my second run. Interview with professors want higher requirement of knowledge that I master, and better understanding of research, both classical and contemporary ones. For the next two weeks, I shall take a review of recent research in China, focusing on the works produced by the faculties in SYSU, but also including some important works from others. It would be a great job, and what I am still under consideration is that, whether I shall read some classical papers, like Coase (1938, 1950), Alchian (1957), Jesnsen and Meckling (1976, 1985) etc. They definitely formed the foundation of contemporary research, especially those on corporate finance.

I don’t think much can be done in two weeks. I suppose the only thing to do for me is to build up sufficient confidence, and take as much preparation as possible. Guys, wish me succeed!

2 thoughts on “The Result of SYSU PhD Entrance Exams Reveals”